Most people do not know that ducks wag their tails.

But this is not the case as not only dogs but ducks and chickens also wag their tails.

And if you have been wondering why they do so then you should read this article to the end.

Ducks are very cute animals and when they start to wag their tails, you simply can’t smile and pick them up to cuddles

But the reason why they wag their tails is more than just to make them cute.

Why do ducks wag their tails?

If you ask most people including duck farmers and those that keep them as pets why ducks wag their tails, they do not have any answers

Here are some of the reasons why ducks wag their tails

1. They wag their tails during mating season

Another reason is that it is a way to impress the females and show dominance over other males which will then make female ducks to take an interest in them and pick them for mating.

While all ducks, both male and female can wag their tails, it is mostly seen among males

In other for males to woo the females and get them attracted to them, they also engage in other activities such as head pumping, wing flapping and preening but them wagging their tails is one important way they attract females

So if you see your ducks constantly wagging their tails, then you know they want to mate and if there are no females around you want to fix that.

2. They wag their tails to show affection

One unique thing about ducks is that they carry out imprinting.

What this simply means is that when a duck is born, they tend to show affection to the first living thing that they see

Now when they see that person or animal approach them they get excited and wag their tails.

This is their own unique way of saying that they care about you and they are excited about seeing you.

3. They wag their tails to preen their feathers

What happens is that as a duck comes out of a pond or has finished playing with water, they wag their tails as a way to dry them.

What to do when my ducks wag their tails?

If you find your duck constantly wagging their tails, what should you do?

1. Provide a partner for them

So if you duck is at home and cannot find a mate, he is going to wag its tail all through mating season

And if you have more than one drake, then ensure that you provide as many female ducks as possible as drakes can be quite vicious and aggressive when mating.

2. Give them treats and cuddles with them

When a duck see it’s imprint human, they get excited and want to show affection to that person

So when they start to wag their tails, the one thing you can do is to feed them, give them treats and cuddles with them

Ducks love treats such as grapes, raisins, bananas, tomatoes and pumpkins which you can feed them with.

They also enjoy cuddling and hugging and if you can then show them some love and affection.

How do you know when a duck likes you?

When a duck has imprinted on you and likes, it tends to follow you all around

So if you notice any of this behaviour among your birds, just know that they like you and will like some form of affection.

Which type of ducks wag their tails?

While you will think that all ducks wag their tails, this is not true.

It has been known that it is the muscovy ducks that wag their tails a lot when they are excited and want some affection.

Muscovy ducks are very difficult to miss with their bright red caruncles.

This unusual looking duck has been kept for years and is a staple farm bird among lots of people who keep it for its nutritious eggs and meat.

They are usually black and white in colour but there have been cases where they have various colors such as blue, black, chocolate, lavender, green, bronze, barred and rippled.

On the top of the head there is a crest of erectile feathers which the bird will raise if excited or nervous – the crest is larger in the males.

The crest will be raised by the males in courtship to attract a mate.

Eyes are a yellow/brown color.

The eyes have a nictitating membrane that allows them to see underwater.

The bill is flat and can be yellow, pink, black or any combination.

It can also have pink ‘spots’ on it.

Ducks wag their tails as a sign of affection to people they love.

Among drakes, it is also a way to attract a partner and mate.

Finally they also wag their tails when they want to preen and get rid of old feathers. 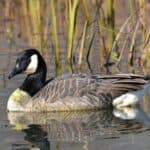 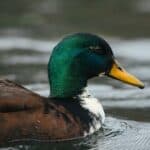