Ever seen a flock of ducks moving about? If you have you probably notice that they walk in a straight line

It is such a beautiful sight seeing them walking like that but have you ever wondered why and if there’s a significance to it?

Why do ducks walk in a line? Ducks walk in a straight line simply to disperse predators, secure their territory when looking for food and as a tactical means to take advantage of their strength in numbers. This allows them to warn off any external threats and also to easily gather large quantities of foods among the flock.

Why do ducks walk in a straight line?

1. Ducks walk in a straight line to improve their survival chances

Think about it, if you want to go camping with friends and family, will you prefer to go the trip solo or to go with company

I will definitely want to go with the company, same thing with ducks.

One thing you should know is that collective behaviour among ducks is a form of social interaction that also improves the social harmony among the groups.

This is why as young ducklings, they always follow their mother hen wherever she goes and they do it in a straight line.

2. Ducks travel in a line to protect themselves from predators

Another very important reason why ducks move in a straight line is as a defense mechanism against predators and threats.

Think about it for a minute – predators will definitely think twice before they attack a group of birds than if it was just one bird.

As a group, they have a better chance of fighting off and scaring away any potential threat than if they were just single and walking on their own.

This is something known as the “predator confusion effect” and this theory is based on the idea that it is very difficult for a predator to pick out an individual bird from a group because the many moving targets will create a sensory overload of the predator’s visual channel.

What this means is that as ducks move in a group, they are much better at spotting danger and scanning the environment for predators can be spread over the many birds that are available in the flock.

This mass collaboration allows for a better and higher level of vigilance and it also allows individual birds to also partake in other activities without worrying about impending danger.

Finally for the predator detection reason, ducks move in a group as a result of something called the “encounter dilution” effect.

So for example, a potential prey might benefit by living and moving together with a group as a predator is less likely to attack a single group than a scattered distribution.

In the attack side of the equation, it is also likely that an attacking predator is less likely to attack a particular bird if a great number is present.

3. Ducks walk in a line as it enhances foraging.

Another reason why ducks walk in groups and in a line is because it helps them forage and look for foods better.

So by following their mother around in a straight line, she can direct them to available food and make sure that they are eating the right food.

4. Ducks move in a straight line for enhanced locomotion efficiency

According to this theory, it suggests that a group of birds moving, swimming or flying together in a straight line may save energy

As young ducklings, their feathers are not strong enough to swim or fly effectively.

So by moving their mother around especially when swimming, she helps them move further and faster without them straining themselves.

Also by the mother being in front, if she spots a danger ahead she calls out or sends an alarm to her ducklings notifying them to freeze or hide.

If she moves away from the threat then her ducklings will follow typically in a row and a straight line.

What this means is that when ducks are born they tend to show love and care to the first living thing that they set their eyes on and in this case it’s their mother.

So asides from the usual reasons of the mother providing for them and shielding them from prey and harm, ducklings will also follow their mother around as a result of being imprinted by them.

Also when ducks are born, within the first 24 hours they can neither swim nor walk

And they need to feed so they tend to find their own food which consists of vegetation, small insects and invertebrates

When they are small they usually struggle to get through heavy vegetation and shrubs, so they will follow their mother around in a straight line because her movement will help push the vegetation aside and they can pass freely and find food.

Ducklings also rely on their mother for the production of water repelling oil during the first 4 – 6 weeks of their lives.

So their mother’s oil repelling oil helps protect and keep them safe during this period before they grow their own feathers.

Ducks walk in a straight line as a defense mechanism against predators and as a way to effectively gather food.

Walking in a straight line also helps ducklings move through dense vegetation and get to food easily before they learn to do it on their own. 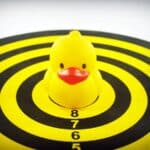 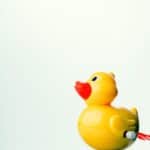