Birds are naturally endowed with the ability to fly, which is nothing new. However, not all birds fly as high as one might expect.

Some, on the other hand, fly extremely high. Eagles are an excellent example of such birds.

When you think of eagles, you immediately think of high and long flights. They are one of the most powerful flying birds. They were typically designed for the sky.

So then, why do they fly so high? Still, confused about this? Let’s clear your worries.

Why Do Eagles Fly So High

1. To survey and spot for food

Eagles fly at a higher altitude to better search and spot their prey. These birds have excellent binocular vision.

And they make good use of it. And so, they can spot prey no matter how high they may be.

Eagles fly at higher to enhance their ability to survey and spot their prey. This is typically the major reason why eagles fly.

Aside from their incredible vision, eagles also have the physical ability to fly high. Eagles have a tendency to ride on warm thermals during the midday hours in order to gain height.

This allows them to make full use of their powerful muscles and flight feathers. Their feathers and muscles give them support as they soar at high altitudes.

Related: Here is an article I wrote on do eagles fly at night

This is also one of the reasons eagles fly. However, migration is only partial for Bald eagles.

These species will occupy a territory year-round. However, water and food resources have to be available.

Despite this, most eagles have been observed migrating south or to the coasts. This is most noticeable during the winter season. And these birds do this in order to find food.

During the winter, food is usually scarce. And birds do whatever they can to survive

4. To take in oxygen

Eagles as well as other high-flying birds are known to have larger lungs. And so, they can take in more air than other bird species.

Eagles fly at high altitudes to consume enough oxygen. They cover the ground by taking long glides, then soaring up and repeating the process.

This helps to normalize their breathing. They usually expend a lot of energy flapping their wings.

According to research, these birds’ brains and hearts receive more oxygen during high-altitude flights.

High-flying birds, in particular, have hemoglobin that has been specially modified. This is the substance in red blood cells that holds oxygen.

It has been discovered that their hemoglobin molecules have a higher affinity for oxygen. This aids in the delivery of more oxygen to the birds’ bodies.

This article covers other Interesting facts about eagles and their unique flying abilities. So, keep reading for more information.

How High Can Eagles Fly

Eagles, according to research, can fly at altitudes of over 10,000 feet. When compared to other birds, that’s a lot of height.

They also have an incredible amount of speed. For normal soaring, eagles can reach speeds of 28-32 mph.

Interestingly, when pursuing prey, these birds can be even faster. However, most eagle species are faster than others.

The golden eagle, on the other hand, is much faster. It can dive at speeds of up to 150 mph.

Do Eagles Fly High To Get Rid Of Crows?

In comparison to eagles, crows are small birds. However, they have been seen attacking larger birds such as hawks and eagles on numerous occasions.

They do this, however, to protect their nest. The majority of the time, these birds steal food from eagles.

This is only possible where their feeding territories intersect.

Eagles can soar higher than crows. As a result, they use this as a means of escaping the crows.

It’s natural to wonder why eagles would flee from these birds. Crows, for example, are smaller birds.

And it is normal to think that eagles would be more dominant than they are. However, this is not the case.

Let’s find out why the reverse is the case.

Crows are rarely found alone. They travel in groups, as opposed to eagles, which are solitary birds.

Their strength is undeniably derived from their sheer numbers. These birds migrate and live in groups.

Most of the time, they work together to chase off threats. Furthermore, their large numbers give them the confidence to steal food from larger birds such as eagles.

Crows, unlike other birds, live and socialize in much larger and tighter groups. An eagle cannot be defeated by a single crow.

What Is Special About Eagles Wings?

The wings of most eagles are quite long and wide. This allows them to glide and soar with less effort.

Broad wings can keep a bird in the air longer than narrow wings at low speeds. When an eagle carries its prey into the air, its broad wings provide extra lift.

Surprisingly, the majority of the energy required for an eagle to fly comes from the downward stroke of the wings.

Again, the eagle’s wings are extremely light. This is yet another incredible feature of their wings. An eagle can have wings that are nearly 8 feet long and weigh less than 2 pounds.

Furthermore, their entire skeleton weighs just over half a pound. Amazing!

How Long Can An Eagle Fly Without Landing

The extent to which eagles fly is determined by a number of factors. These factors include:

During migration, eagles can fly for up to 124 miles or more. This is only for migratory eagles. During non-migration, they can fly 10-20 miles a day, sometimes less.

There are however, other factors. But let’s give it a pause here.

Do Eagles Fly Higher Than Other Birds

Let us not forget that some ground birds do very little or no flying at all. Despite this, not all flying birds fly at the same altitude.

Birds fly at various altitudes to meet various needs such as foraging, migration, and hunting.

As previously stated, the eagle can fly up to 10,000 feet in the air. Who can compete with that, right? Without a doubt, this bird is one of the world’s highest-flying birds.

The Ruppell’s griffon vulture and the bar-headed goose, on the other hand, have been observed to fly higher than the eagle.

The Ruppell’s griffon vulture can fly at altitudes of up to 37,000 feet. The bar-headed goose has been spotted flying at nearly 28,000 feet.

What Does It Mean When Eagles Fly Above You

The eagle is a noble and well-respected bird. They are regarded as royalty. And there are several beliefs that come with seeing an eagle, whether in a dream or in real life.

However, if you see an eagle flying over you, don’t be concerned. When an eagle flies over you, it could mean one of the following things.

Some people believe that seeing an eagle fly over you represents seeing a situation or goal from a higher perspective.

This could be an invitation to move beyond the limitations. Or any other thing that keeps you too close to a situation to see the bigger picture.

Do Eagles Fly Above The Clouds

Eagles, soar above the clouds. They do this to stay out of the rain. When it rains, birds usually seek shelter to stay dry.

To avoid rain, eagles are the only birds that fly above the clouds solely to avoid the rain.

Other migratory birds, such as Wandering Albatrosses, can also fly above the clouds. There have been reports of planes colliding with them in the air.

Can A Crow Fly Higher Than Eagles

No, a crow cannot fly higher than an eagle. The eagle is one of the most powerful flying birds. Its broad wings are one of the main reasons it can fly so high.

The crow, on the other hand, can fly at speeds ranging from 30 to 60 miles per hour. In addition, when in a dive, they can maintain a high speed of 70 mph.

Eagles are high-flying birds. According to findings, these birds can fly at altitudes of over 10,000 feet.

Although these birds are naturally designed for the sky, they do not fly high for no reason.

They fly high to source for food.

When going after its prey, the Bald eagle can move at a speed of 100 mph. The golden eagle, however, is known to be much faster. It can dive at speeds of up to 150 mph. 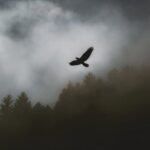 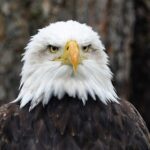