If you keep guinea fowls at home, then you must have wondered why they chase each other.

Guinea fowls chase each other for different reasons, one of which is to demonstrate dominance. During mating season, it is common to see male guinea fowl chasing other males to excite the hens.

Let’s delve a little further to learn more about why they chase each other around and how to cut down the chasing.

Reasons Why Guinea Fowls Chase Each Other

To some people, this behavior might seem a bit worrisome. However, to experienced guinea fowl breeders, this habit of chasing each other around for hours is a regular occurrence.

Here are the three most typical reasons why guinea fowl chase each other in circles:

1. The Males Are Asserting Dominance

A common means of asserting dominance in guinea fowl is by chasing each other around.

Male guinea fowl often do this with each other. This act of chasing each other is their method of letting the flock know who’s in charge. This is some hierarchy within the herd.

The male that wins the chase automatically becomes the first in the hierarchy. How do you know this? Well, whichever of the running fowl stops running first becomes the most dominant of the flock.

This act of pursuing each other is mainly seen with the male guinea fowl, so if most of your flocks are males, you may witness it more often, which is often entertaining to watch.

2. As A Means for the Males to Impress the Female Guinea Fowl

We all know that the mating season is the period at which most animals express different odd behaviors.

Just like the guinea fowls, this is when the male chases each other around to impress the female fowl.

This is their means of demonstrating to the hens that they are the best option for mating. The fowl runs the longest without stopping wins.

The pursuit between two male fowl frequently begins with one chasing the other in one direction before switching roles and fleeing in the opposite direction.

When one of the fowls becomes too exhausted to continue running and stops, the other wins the race and gets its attention from the hens.

P.s. this chase can last for hours, but whoever wins gets your female guinea fowl’s attention.

Related: Here is an article I wrote on why do guinea fowls make noise

During the mating season, the male guinea also chases the female guineas. This only happens in a flock with limited competition.

That is, there are maybe one or two male guineas in the flock. You’ll see the male pulling a hen’s back feathers before mating.

It is an approach for them to determine whether the male is worthy of their attention.

Ways to Prevent Guinea Fowl from Chasing One Another

You can use different techniques to prevent your guinea fowl from chasing after one another.

The following are some standard methods:

1. Introduce the Pack to a few Hens

Your male guinea fowls will suffer a hormonal surge during mating season. If your flock is lacking in females, you might consider introducing some to the mix.

Make sure that the pack has an appropriate female-to-male ratio. This will prevent them from fighting over the female guinea.

2. Make more Room for your Guinea Fowl to Move about in.

If you’re putting your flock in a room, make sure there’s enough room for each bird, especially when they want to spread their wings.

Sometimes guinea fowl exhibit dominating traits, and a room space can result in the stronger ones chasing away the ones they perceive as weak from the area they believe to be theirs.

When Guinea Fowl chase each other, do they get hurt?

Breeders sometimes worry that their guinea fowl will get hurt if they are constantly pursuing each other.

They sometimes get aggressive, tugging at other birds’ feathers.

Fortunately, these birds aren’t chasing after one another with the intention of hurting each other, but rather it’s one of their playful nature.

Irrespective of their desire to assert dominance over the others, male guinea fowls do not use violence when chasing each other.

Rather, they would wait until the other birds had stopped to see if they had succeeded in claiming the top position in the hierarchy.

At the same time, some male guineas also peck the female guineas at their back feathers during the mating season.

First-time breeders find this concerning whether the male guinea is exerting too much power, which could injure the hens.

One thing to keep in mind is that female guinea fowls do not get by mating. Similar to the male guineas chasing each other around, they can control how much power they use on the females.

So put your mind at rest and know that the females are unaffected by the chase because it’s just a game to the flock.

When it comes to other birds, are Guinea Fowl aggressive?

The game of chasing each other among guinea fowl is a common habit, which can raise concern among breeders, begging the questions if they are aggressive to other birds.

Therefore we need to know if aggressiveness is a cause for concern.

Actually, it all depends on the variety of breeds you’re rearing because guinea fowl can be pretty aggressive to other birds.

Guinea fowl value their pecking order, which explains their desire to chase after one another. As the guineas hunt and peck the other birds around, they can end up hurting them in the process. So separating both species from each other is essential to prevent serious injuries.

However, if you have several distinct species in one area, they can still coexist.

It might take the guineas some time to become familiarized with the other birds. They can still coexist peacefully, inasmuch as they aren’t bigger in comparison.

It is advisable to monitor the birds carefully and see how they cohabitate together. This will help you know if the guinea fowls are causing any harm to the other birds.

You might have to separate at the ending if you notice any aggressiveness with the flock.

Guinea fowl chase after each other most times for its fun or to assert dominance in the flock.

It is a harmless game to know who the best is.

It is quite entertaining to watch, although it can go on for hours. So if you’ve got the time, pick a chair and a watch. 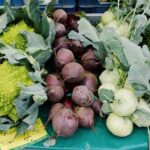 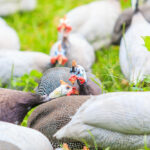