It’s hard to imagine guinea fowls as anything but wild, even though they’ve been domesticated for centuries.

Even though they aren’t particularly friendly, they’re easy to keep.

Guinea fowls make noise when they are being social, startled, upset or when they are on alert. This is their way of communicating to the outside world that they are happy, restless or there is the presence of an intruder.

Guinea fowls have a similar appearance to chickens but their ways are far different from one another.

There’s no question as to whether guinea fowl are noisy. In movies or documentaries set in Africa, you might hear loud noises.

In the future, you’ll hear the same sounds in different places, thanks to the presence of guinea hens in your home. You can rely on them to keep an eye out for intruders..

Not only are Guinea fowl raised as a biological control for pests, but they are also raised for meat and egg production.

People are more likely to keep them in rural areas than in urban ones because they are noisy.

In this article, we will be talking about the different reasons Why Guinea Fowls make noise and the type of noise they make.Eager to know why? Let’s go!

Reasons Why Guinea Fowl Make So Much Noise

Guinea fowls have four modes of operation: eating, sleeping, chattering, and screaming in terror. As a result, you should always be prepared.

1. When they are being social

In the company of their kind, Guinea fowls are highly social creatures. They tend to travel in groups and communicate incessantly with each other

So if you are having issues related to noise, this is one of the reasons why Guinea makes noise

2. When they are startled

Another reason why Guinea fowl make so much noise is when they are startled.

These birds scream and make noise in response to a variety of environmental changes. They can cry out at something as simple as a change in their yard.

3. When thy are Alert

Guinea fowl, on the other hand, can make a lot of noise when their environment changes or when Insects and predatory animals can be present.

Compared to other birds, Guinea fowl are relatively stupid even when you expect them to understand that an external stimulus is harmless.

Whenever a member of their group dies, Guinea fowl will make a loud noise.

They gather around the member who has died and scream in anguish at him.

When a member of the group gets lost, they also become noisy. It is common for lost members to call out to the rest of the group until they can be reunited.

Related: Here is an article I wrote on why do guinea fowls chase each other

There is a variety of sounds Guinea fowl make.

One-syllable and two-syllable calls are used by Guinea Fowl.

Both males and females make the monosyllabic sound. Guinea cocks, on the other hand, are more prone to this sound.

Now that you know why Guinea fowl make so much noise and the type of noise they make.

How to keep Guinea fowl quiet

Though it may seem impossible, you may be able to reduce the amount of noise your guinea fowl produces. Keep the peace by following these tips.

1. Remove the loudest one from the group

Some members of guinea fowl groups are noisier than others. They set the pace for the others in many instances. As a result, the group begins to make a lot of noise.

By removing the loudest members, you can reduce the amount of noise created.

The remaining birds are left to imitate the quieter behavior they observe around them if any.

2. Make sure their needs are met

Keep guinea fowls quiet by providing them with food, water, and heat.

Originally native to Africa, Guinea fowl require a relatively warm environment, especially as keets. As long as they’re comfortable, they’ll be less likely to speak up.

3. Hatch Your Keets and Raise Them With Chickens

It’s possible to raise guinea fowl that are quieter by raising keets yourself.

You can condition your keets to act more like chickens by hatching them around other birds such as chickens.

In contrast to guinea fowl, chickens are less noisy and less prone to flight, making them an ideal influence on the keets.

Guinea hens are said to be a lot louder than male Guinea. Guinea hens that are being reared alone often have this trait.

If there is the presence of a male guinea, then the excessive noisiness in guinea hens will be curbed.

When Guinea hens make noise, it is often a mating call and can be lessened by providing a male guinea fowl.

It is important to introduce the Guinea to a Guinea Hen gradually.

They won’t think of the stranger as a threat, which could make them even louder and put the animals in danger, so they won’t become aggressive.

By training your guinea fowl and communicating with them, you can minimize the noise during the day.

As a result, they are more likely to respond to calls for communication.

Their sensitivity should be minimized by avoiding unusual events that can set them off.

Keep your guinea fowl in well-lit areas at night, as darkness can make them restless.

Interference from intruders should also be avoided.

If you want to keep your Guinea fowl as quiet as possible, you’ll have to train them.

Their environment is the most important factor in their loudness. You can make them quieter by raising them with quieter birds, such as chickens, and in a tranquil environment. 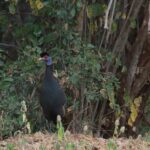 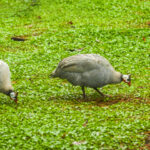