While wild Ostriches eat virtually anything it has not been recorded that they eat their eggs.

They can eat anything since they are omnivorous. Ostriches are very flexible eaters and have different diets.

They can eat anything ranging from plants, bugs, small animals, insects, rocks amongst other things.

What Do Ostriches Do With Their Eggs?

The primary thing an Ostrich does with their eggs is to incubate them until they hatch.

In Ostrich, both the male and dominant female take turns to incubate the eggs even though other females will lay eggs potentially from different males as well.

Having many eggs in a nest is advantageous to the ostriches because it serves as insurance so that not all the eggs will be taken by the predators.

So taking charge of the other male’s eggs to guide and protect the eggs serve as protection for the alpha male’s eggs.

At the center of the best is where the dominant female eggs are being kept, the minor hen’s eggs are then added to the outside of the pile, the communal best that was dug in the ground by the alpha male of the group can house up to 60 eggs in it.

Each egg weighs 15cm long and weighs  1.5 in weight, an ostrich egg is the largest in the world.

The eggs hatch after 6 weeks if only the eggs can be kept safe from jackals and other predators of the Ostrich egg.

The female then incubated the eggs with help from the male ostrich.

Ostrich live mainly in dry habitats, the food in these regions is limited, 60% of an ostrich’s food is made up of plant matter, they feed on roots as well as plants and leaves.

When Ostrich’s young hatch, they absorb the remainder of the yolk sac contained within their shell into their abdomen and the nutrients that are gotten from this sac will help sustain the young for two weeks.

However, they should begin eating around 7 days after hatching, so that when the sac depletes they can still maintain normal growth.

After two weeks the chicks rely on browse as their main source of feed, in the wild, the young ostrich learns how to feed by imitating the behaviors of their parents.

As birds do not have teeth, they end up swallowing stones to help them in grinding food eaten before the food moves to the digestive system for absorption.

The predators of Ostrich eggs that eat them are the Egyptian vultures, hyenas, and jackals.

Here is an article I wrote on why do ostriches dance?

Do Ostriches Leave Their Eggs?

Ostriches do not abandon their eggs, the male and dominant hen will rather take turns sitting on the nest to incubate them.

The dominant hen lays her eggs first and when it’s time to have the eggs covered for incubation, she discards some eggs from the weaker and minor hen eggs collection, in most cases, she leaves about just 20 eggs in most cases.

The dominant hen can recognize her eggs in the communal best, the eggs are glossy cream-colored with thick shells marked by small pits.

By doing this, the coloration of the two different sexes of the ostriches comes in handy to escape detection of the nest.

The female ostrich has a drab color that makes her blend into the terrain in the daytime and during the nighttime, the dark color of the male ostrich makes it blend with the coloration of the night.

Typically, the male defends the hatchlings and teaches them to feed. Although the male and females cooperate to rear their chicks.

During the incubation period, the ostriches use their beak to turn the eggs around in the nest to be able to disseminate heat evenly within the nest.

How Often Do Ostriches Lay Eggs?

Not very often. Unlike chickens that can lay eggs throughout the year, it is not so for an ostrich.

The ostrich has specific breeding seasons that commence in June/ July every year.

They will lay eggs every second day until they have eggs that are enough to cover with their body and wings, they will now proceed to incubate them.

The male ostrich is fitted with black feathers while the female district has grey feathers, they will both take turns sitting on the eggs at different to incubate the eggs until the eggs are hatched.

The incubation period is 42 days before the eggs hatch, the babies of the ostrich are more sizeable than every other offspring of birds, the female ostrich and the male offspring share the responsibility of taking care of the chick.

During a predator attack, the chick runs to the female for cover while the male ostrich attempts to entice the predators away from them.

It takes mostly six months for a chick to reach its full-grown height, the chicks reach maturity at three to four years.

Also check out this article I wrote on why do ostriches eat stone?

How Many Eggs Does an Ostrich Lay Per Year?

Under very natural conditions, a female ostrich can lay eggs anywhere between 12 to 18 eggs, in a year, a single bird may lay 40 to 60 eggs after the dominant hen lays its eggs,

The minor hens lay theirs and place their eggs to the outside of the communal nest. The nest may have as many as 60 eggs but only about 20 eggs get hatched.

How Do Ostriches Care of Their Eggs?

The ostrich takes care of their eggs by sitting on them to incubate them and then protecting them from predators like hyenas among other predators that may likely come after the eggs.

During the daytime, the dominant hen sits on the eggs, and with her grey color, she can blend in with the terrain and fool any predators from thinking she is sitting on the nest, at night the male ostrich takes over, and this continues until the eggs are hatched.

Additionally having many eggs in a nest is advantageous because when push comes to shove a predator will not be able to steal off all the eggs, thereby leaving some eggs to get hatched.

Ostrich parents do not actively feed their chicks, the chicks rather will absorb a vast amount of yolk from the egg yolk sac which can keep them sustained for two weeks.

After two weeks, the chick learns to walk and start following their parents to learn how to eat, baby ostrich feed themselves instinctively, the parents or other ostrich adults will just guide them to food forage.

As oninivores animal, the ostrich can eat any time of food ranging from plants, to seeds, to insects to stone.

The stone solely helps in grinding the food for digestion, as freely as the ostriches eat they do not eat their eggs.

The baby chick on the other hand, after it hatches feed on the yolk from the yolk sac for two weeks, after two weeks they follow their parents or any other adult ostrich to learn how to forage food.

During the breeding season which starts in June/ July the Female Ostrich will lay eggs between to 12 to 18 in number for every two days until the eggs is many enough for the ostrich to sit on.

The ostrich care for their eggs by sitting on it to incubate them and blending with the terrain to fool predators from seeing them sit on the nest. 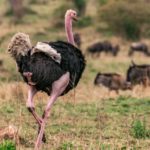 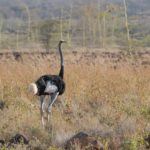