One of the most remarkable features of Ostriches is their big eyes which help them spot predators and prey from a distance.

If you ever spot an ostrich in the wild, take our word for it when we say that most likely, it saw you coming long before you ever did.

And the reason for this is very simple- Ostriches have a remarkable vision.

If you have never seen an Ostrich, it is understandable to wonder why their eyesight is so good, whether owing to their eyesight they can see in the dark, and just how big their eyes are. Stay with us, we have all these answers and even more.

How Many Eyes Do Ostriches Have?

Ostriches have two eyes that are close together.

Their eyes are just like that of a human- binocular- but much better than ours.

With binocular vision similar to ours, the similarities do not stop there as recent studies have shown that their cornea can be used to replace that of a human.

Why Do Ostriches Have Big Eyes?

Ostriches have big eyes to help them see predators from afar off.

In the wild where they reside, Ostriches are prey to other animals that reside at the top of the food chain such as lions, leopards, cheetahs and even humans.

Their big eyes help them become aware of the danger before it is near more often than not.

Their big eyes are the main reason that predators of the ostrich are only successful when launching sneak-opportunistic attacks.

Studies have revealed that the eyes of an ostrich are as big as 5 Centimeters in diameter. To put it in context, that is more than four times the size of the average human eyes.

And while it is true that “bigger” is not always “better”, it is when it comes to the ostrich’s eyes.

The Ostrich’s eyes are so big that it is bigger than its brain and perhaps bringing to the fore the fact that what they may lack in intellect, they make up for in vision.

Ostriches also have big eyes as these help them guide their territories from predators that prey on their eggs.

The Ostrich eggs are the biggest of all birds and would comfortably suit a grown man’s hunger or even that of a snake, jackal, skunk, or badger.

These prey do not attack the ostrich itself as they are ill-equipped to do so. Instead, they go after their eggs or young hatchlings as these make for easy prey.

Do Ostriches Have Good Eyesight?

This enables them to be able to spot predators from afar off. To put this in context, they can see an animal the size of a dog as far as thirty-three standard football pitches away.

This imperious vision definitely gives them an advantage and means that they’re very vigilant birds.

With such wonderful vision, only nonchalance or sickness makes them fall prey to predators.

The ostrich’s eyes are accentuated by lashes that help shield it from the intense heat and glare of the sun.

This means that the glare of the sun does not dampen the ostrich’s ability to see far. These lashes also beautify these ratites of the African savannah.

The lashes are made up of feathers and seemingly so well fitted that most times they make the ostrich look like a human with mascara on.

The Ostrich’s lashes also protect its eyes from flying sand to ensure that its eyes which proves to be one of its most indispensable features retains its potency.

Also playing it’s role in making sure that ostriches have good eyesight is the nictitating membrane inside their eyelid that imitates the function of a car wiper on windscreen.

This membrane helps to keep the Ostrich’s eyes moist and clean.

Can Ostriches See In The Dark?

Yes, Ostriches can see in the dark.

In fact they can see as far as 50 meters in the dark. In football terms, that is about half a football pitch in pitch-darkness.

Their height also helps them see over bush and grassland where predators are likely to hide in their attempt to sneak an attack on them at night.

Do Ostriches Have Bigger Eyes Than Elephants?

Perhaps, this may come as a shock but it’s true. Ostriches have eyes that are disproportionate to their heads.

In fact, most likely, if you ever saw an ostrich it would be the one feature that strikes you first.

For context, each eye of an ostrich is the size of the bee hummingbird which is admittedly the smallest bird in the world(still this shows you just as enormous its eyes are).

To put it in further context, that is 5 times the size of the average human eyes.

While an Ostrich can see as far as three thousand five hundred meters, the Elephant’s vision is relatively poor and can only see as far as ten to twenty meters.

The elephant’s small eyes have been chalked down to many factors. One being the size and position of its neck and head.

Yes, Ostriches see colors. How do we know?

While we cannot just ask them, we know this for a fact due to scientific research gathered during their courtship and breeding period because color plays a major role during their mating season.

In their normal mating custom, male ostriches evidenced bright red beaks and shins in a bid to capture the attention of the females. The females apparently notice this change and act accordingly.

Thus, the mere fact that the change induces the females is a clear sign that they notice.

The eyes have often been used as a symbol of knowledge or inquisitiveness.

No doubt, the eyes of an Ostrich plays that same role.

These inquisitive birds are always on the lookout to ensure that they do not be one food to predators like lions, Cheetahs, and leopards.

Their vigilance also helps them protect their young from attack from opportunistic predators like the snake, badger and skunk that could easily make easy work of the eggs or young hatchlings.

We have also seen that even at night, their vision does not fail them.

They are able to see as far as 50 meters in darkness. That’s much farther than Elephants can see even during the day time.

Lastly, we considered their ability to perceive color through their eyes- a feat which is evident from their dating ritual. 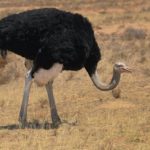 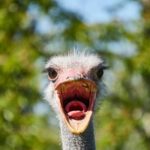