Most owl species’ legs are hidden by their plumage, but a few, such as the barn owl, have them exposed.

Because the strength of this nocturnal hunter’s grip is determined by the strength of his leg muscles, it’s only natural that they have long legs to aid in the capture of prey!

The response is mostly for increased hunting strength so that the owl can successfully kill and carry its prey.

The legs of an owl are quite lengthy, which makes sense. The lethal talons that are utilized for hunting are propelled by these legs.

Owls attack and catch food by swooping down with their feet first, thus having little, ineffectual claws makes no sense. Behind their razor-sharp talons, they require strong, long legs.

An owl’s talons are the strongest of all raptors, capable of exerting roughly 30 pounds of pressure when they wedge their talons into their prey.

The owl’s long legs are connected to a tilted pelvis, which is characteristic of birds that hunt with their feet.

A lengthy fibula allows the owl to rotate its legs and feet for more movement when collecting prey.

Most owl species’ legs are hidden by their plumage, but a few, such as the barn owl, have them exposed.

Because the strength of this nocturnal hunter’s grip is determined by the strength of his leg muscles, it’s only natural that they have long legs to aid in the capture of prey!

You can observe how long an owl’s legs are when they are completely extended when watching them swoop down for their prey.

Owls can carry considerably larger prey than you might think; the Great-Horned owl, for example, has been known to chase our beloved cats!

The feet of owls are bonier and stronger than those of most other birds, with a rough surface on the underside for better grip.

Their claws lock together, making it impossible for victims to flee. When owls fly or perch, three of their toes face forward and one facing backwards, which is known as the hallux.

Aside from the hallux, their toes are short, robust, and meaty. When the owl is holding prey, the outer front toe swivels rearward for a tighter grip.

The hallux is used to stab the prey, and if the prey is still alive, the owl will use force with its talons to crush the victim.

If the prey is too large to eat whole, the talons will rip it up into smaller pieces.

That alone demonstrates how much weight the owl’s lengthy legs must be able to carry – up to four times their weight!

Related: Here is an article I wrote on why owls live in trees

What do owls do with their legs?

It’s well known that owls have powerful talons, which they employ to catch and kill prey, so it’s only natural that they’d require strong legs to take off any prey.

An owl’s legs are also utilized to extend its reach, allowing them to hit prey with pinpoint accuracy.

The length of the owl’s legs is startling, but the fact that they are so thin is even more so.

An owl’s legs might appear quite small and delicate when compared to the rest of the animal!

This, combined with short thighs and long feet, are all adaptations for one thing: flying.

From mice and other tiny animals to birds, reptiles, amphibians, huge insects, and even fish, owls seek them all.

Their legs and feet serve as instruments for catching and killing their prey.

This is usually accomplished by catching the prey in their talons and strangling or stabbing it to death.

Additional blows are occasionally performed with the beak.

This feet-first hunting approach is comparable to that of hawks and eagles, but it differs significantly from that of herons and kingfishers, which hunt head-first and catch prey with their beak.

The major benefit of subduing prey with their feet is that it keeps owls’ heads and eyes out of harm’s path.

For a hunter who relies so largely on his sharp vision, a single kick or scrape from flailing prey may be fatal.

Long and slender does not imply delicateness when it comes to owl legs: Owl talons and legs can be incredibly powerful.

You already know what kind of prey an owl can transport if you saw the owl attack above. A

Great Gray Owl is said to be capable of punching through a crust of snow solid enough to carry the weight of a 176-pound person by leading feet first.

Not bad for a bird that weighs around three pounds, or almost the same as your laptop computer!

How long are the average owl’s legs?

This is due to them being one of the world’s tallest owls on average. That means their legs might be anywhere between 20 and 30 centimetres long.

Why do owls make themselves big?

An Owl may take a “threat” or protective stance when guarding young or defending itself, with feathers ruffled to increase apparent size.

The wings can be spread out and pointing down, and the head can be lowered.

When nesting, certain species become highly aggressive and have been known to attack humans.

Why do burrowing owls have long legs

Burrowing owls, like many other types of owls, spend the majority of their time hunting from twilight until dawn, when they can take advantage of their night vision and hearing.

Because it hunts in wide grasslands rather than woods, the burrowing owl has grown longer legs that allow it to sprint as well as fly.

Do owls have skinny legs

Owls have long, skinny legs beneath all their feathers.

Some photos of what lies beneath an owl’s beautiful plumage have gone viral, changing people’s perceptions of these animals.

Owls, it turns out, have extremely long and thin legs.

The plumage of an owl’s feathers conceals most of its leg length. Their leg length is often unexpected and amusing to viewers when fully exposed.

Leg muscles provide the strength they require to grab and hold on to these critters. As a result, she has an unusually short stature.

The leg length of an owl varies based on the species and size of the owl in question.

An owl’s legs are usually a third to a quarter of its body length, with the majority of it hidden by the fluff of its feathers.

The Great Horned Owl and the Barn Owl, for example, have quite long legs.

Other owl species, such as the Elf Owl, which is the tiniest, have smaller legs to show off. 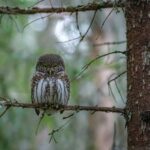 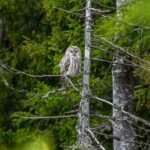