Apart from screaming, owls make other sounds, You can hear an owl shrieking, hooting, or even crying. Depending on the message they want to pass.

Stick with us as we explore various aspects of the communication of owls. They are mysterious creatures that are often considered and associated with the mythical.

Why do owls scream?

When you hear an owl screaming it could be for various reasons.

This is because screaming is a basic form of communication for owls, they scream at various times to communicate various things.

Below are some reasons why owls scream.

1. When they are threatened

Owls will scream when they feel threatened, this is a form of raising alarm and also a form of calling for help.

This is similar to the reason why a lot of animals scream.

As a human would scream if you were in a situation that threatened your life or your safety or the life of someone you care about.

It is therefore not a stretch to understand why owls would scream when they feel threatened.

Usually, threats to any animal are a matter of life and death it would solicit a response that could help protect the animal in question from the threat.

2. When attacking a predator

You can catch an owl screaming when it is attacking a predator, this is part of its response to the threat posed by the predator.

The scream could distract the predator while the owl attacks it.

A male owl would scream to attract a potential mate. This is part of the reason why the scream from an owl could simply be a mating call.

Baby owls that are hungry usually scream, the screams of baby owls are not as loud as adult owls, therefore, it might sound weird.

Related: Here is an article I wrote on how do owls show affection

The sound of an owl’s scream depends on the particular species of the owl.

The typical scream of an owl, like a Barking Owl, Could easily be mistaken for a woman or a child screaming because that’s how it sounds.

The screams are usually about two to three seconds long and they’re very harsh. You can hear them from miles away, it is usually very intense and sounds very human.

What does it mean when you hear an owl screech?

There is no straight answer to this because owls screech for different reasons and different cultures associate different meanings to the screech of owls.

Some cultures believe that when an owl screeches it is a bad warning, typically it is a call of death.

That is why shortly after a person who believes in this sort of thing hears an owl screeching someone dies around them.

In some cultures, an owl screeching around you is a terrible omen and would bring bad weather, seasons, and possibly death.

Some cultures however believe that angels try to communicate with humans by using owls, so the screeching sound of an owl is possibly an Angel trying to reach out to you.

Let us explore what some cultures interpret an owl screeching to mean.

Also, several meanings have been attached to the time that you hear an owl screech, this is all due to the fact that owls are viewed as such mysterious and supernatural creatures.

It is believed that if you hear an owl screech in the day that something splendid would happen to you and that you are an extremely lucky person because owls do not typically come out at that time not to talk of screeching.

Also, it could mean that you need to make some changes in your life, these changes are often drastic.

When you hear an owl screech in the morning it is usually interpreted that a lot of enlightenment is coming your way and this could change your life.

What owl screams at night?

The owls that usually scream at night are Barn Owls.

This is the most popular species of owls that scream at night and it sounds like the scream of a human being.

They do this to raise awareness about their position. The scream is usually very loud and fierce. It is usually the male barn owls that make this sound.

Why do owls hoot 3 times

Hooting for owls is a form of communication, they do it to pass different messages.

They hoot three times because they are accustomed to it however they could hoot more or less than three times. the reasons they hoot include the following.

Why do owls hoot in the morning?

Most owls are nocturnal so they are active at night, if you hear an owl hooting during the day it is most likely that that owl is not nocturnal.

However regular owls, which are nocturnal, can be heard hooting in the morning especially when it is very early.

This is because possibly at that time they have not started sleeping or resting from being active throughout the night.

Owls do not cry the way humans do, by tears rolling down their cheeks from their eyes.

This doesn’t mean you would not hear owls making sounds that are similar to the sounds humans make when they cry.

Owls also have tears, this is mainly for the maintenance of the owl’s eyes.

Owls do not cry like a human but make sounds that seem like crying, the version of human crying for owls is their screaming. So owls cry in their unique way.

How do owls communicate

Each of these types of sounds passes messages And is a way for owls to communicate with one another.

Owls are effective communicators even with their screams. 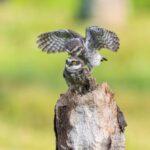 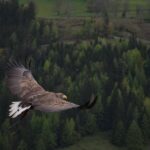