When it’s spring, then it’s time for turkeys to begin mating and laying eggs.

During this period, the male turkeys gobble calling out to the females and when there are female turkeys around, they perform a kind of mating dance.

Why do turkeys puff up? Male turkeys fan their tails, drag their wings and puff up their feathers, while circling, displaying their colorful feathers. This is to attract the female turkeys. Their snoods also become longer and red.

So basically, turkeys puff up to attract hens during the mating season.

It is a kind of ruffling of their feathers which is always a delight to watch.

Do female turkeys puff up?

Female turkeys do not have the habit of puffing up their feathers as they do not perform mating dances or rituals like the males.

However, it is not unusual to see some female turkeys puffing up.

This usually happens when there are no males in the flock.

If you have just female turkeys in your yard, you may see one or two puffing up once in a while. It is probably a way of showing dominance among the hens.

Female turkeys also puff up in response to a predator that goes near a brood. It is like a defensive instinct.

Related: Here is a comprehensive guide where you can learn everything about raising turkeys

What does it mean when a turkey fans its feathers?

Male turkeys fan their feathers and they do it to attract female turkeys during the mating season.

It is part of what they do while strutting.

They do this by spreading their tail feathers to form a fan.

It is always a beautiful sight as their tail feathers are usually bronze tipped and even.

Why do turkeys strut?

✓ To attract hens. Male turkeys strut during the mating season to attract the hens for mating.

They do this by dropping their wings and dragging the primary feathers, fanning their tail feathers, elongating their snoods and puffing up to appear bigger.

They do this circling a spot and showing off their colorful feathers in order to attract the hens for mating.

✓ To show dominance. Mating season is not only the time male turkeys strut.

Though it is not so common but toms strut at other times too.

They do this to establish dominance in their flock.

When there are other toms around, the male turkey can strut to show superiority and dominance.

How do turkeys show affection?

Turkeys are friendly creatures and show their affection when they like you.

They do this by following you around and not running away when you approach them.

They will eat from your hands if you offer them food and allow you to touch or carry them.

They are calm around humans and show their affection generously when they are well treated.

When a turkey has come to trust you, it will always be around you, following you around and allow you to hold her.

Male turkeys tend to be aggressive during the mating season trying to show dominance especially if it sees you as a rival.

However, proper training can curb this behavior.

When the turkeys has been trained to know acceptable and unacceptable behaviors, there won’t be an issue.

A turkey that has been around humans for a long time and has learned to trust them will allow humans to pet it.

Turkeys love to be held, cuddles and stroked.

Turkeys however have different personalities, so you may want to make sure that particular turkey is okay with hugging.

Turkeys puff up to show off in front of the females during mating season in order to attract them for mating.

This is part of their courtship display.

They do this by ruffling their feathers to make them appear bigger.

Female turkeys occasionally puff up too.

They do it to show dominance, respond to predators threatening their young ones, or react to hunting decoys.

This is unusual, and a rare sight many people are yet to see.

A turkey fans its feathers to attract mates.

The male turkeys spread their tail feathers and it forms a fan which looks attractive even to human eyes.

This is to attract the female turkeys to come closer for mating.

A male turkey can mate with several hens.

Turkeys strut to attract hens for mating. They also do it in front of other male turkeys to show dominance.

Turkeys show affection by following you around, letting you pet and cuddle them.

They are friendly and relate well with humans. They also recognize humans.

Turkeys like to be hugged generally but since they have different personalities, you should relate with them based on their personalities and behaviours. 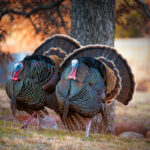 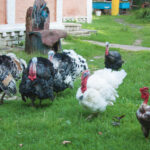