Potting soil bags come in various sizes and volumes, all of which are sealed. For various plant species, these nutrient-rich soil and potting mix bags are ideal.

Because of its decomposition in the soil, mold is an essential aspect of the natural world. Microbial spores can be found in almost every soil.

If you’re utilizing sterilized soil, this rule doesn’t apply. Mold is likely to thrive in a damp growing medium like potting soil.

However, if sufficient care and maintenance are not followed, potting soils can become contaminated with mold and other hardy fungi.

So If you enjoy gardening, you may have come across moldy potting soil at some point.

Why Does My Potting Soil Get Moldy?

Because potting soils are packaged in sealed bags, there is an abundance of moisture inside the bags that encourages the formation of mold.

After a few days, you should observe mold formation on the container or pot if you transfer the soil.

A look at some of the most prevalent sources of mold in potting soil bags is provided below.

Here is an article I wrote on why does potting soil smell?

Is it OK To Use Potting Soil That Has Mold?

The presence of mold in your potting soil is acceptable at times. Mold, on the other hand, can be good for your plants.

Isn’t it possible that not all molds and fungi hurt plants? Saprophytic fungus is almost always white and fuzzy in color (mold).

Compost fungi, which are naturally present in plants, cause saprophytic fungus. In decomposing non-living organic debris, it enriches the soil, which is good for plants.

When your potting soil develops mold, you’re probably wondering what to do and how to get rid of the mold.

This post will address all of your concerns, but first, let’s look at the most prevalent varieties of mold discovered in potting soil.

How Do You Fix Moldy Potting Soil?

It’s natural to want to scrape off mold from your potting soil, but there are effective alternative ways to accomplish so.

Mold can be dangerous to people; thus, wear gloves and a face mask before attempting any remediation.

Even if you cut back on watering, if the soil doesn’t dry out, the problem is most likely one of drainage.

You can enhance the drainage of your plant by:

Additional holes in the pot’s bottom are being drilled out. A layer of rocks or gravel is placed on the bottom to prevent soil from clogging drainage openings.

Repotting the plant in fresh soil is the proper course of action. If you’ve already planted your plant, it can be difficult to increase your pot’s drainage.

It’s best not to disturb the soil in order to reduce transplant shock. Unless you’re repotting your plant or potting it for the first time, you should only use the drainage tips listed above.

Increasing the quantity of airflow around your plant’s potting soil is another approach to dry out the soil’s surface and kill the mold.

As a result, the soil remains wet for longer periods than it should. Mold can flourish now because the conditions are right.

To promote airflow and combat mold, you can do a few things:

Ensure that the soil is dry by putting the plant outside in the wind and sun.

Point a fan at the plant’s soil at a low speed.

They should be exposed to the sun’s rays.

Before anything else, set the plants in an area with access to sunlight and adequate ventilation.

If the mold is still in its early stages, it can be cured by exposing it to enough fresh air and sunlight.

Remove the plants from the pot and use fresh potting soil to replace any moldy soil already there.

Don’t forget to clean the pot afterwards to guarantee no mold remains.

A good care routine should be established immediately after repotting plants to prevent mould re-emergence.

Once you have tried to eliminate the mold manually, using a fungicide will remove any remaining remnants in the roots.

Potassium Bicarbonate can be mixed with water and used as an alternative to chemicals. It is also a natural fungicide that cinnamon (Cinnamaldehyde) performs.

How To Get Rid of White Fungus in Soil?

Add an anti-fungal solution to the soil after removing the mold.

Cinnamon or baking soda can keep most of the mold from returning.

Make sure you don’t use too much anti-fungal and that it’s uniformly distributed.

Your potting soil is no longer a mystery about how and why it becomes moldy. Mold growth can be prevented by following a regular cleaning regimen.

Your plants’ health is at stake, so it’s critical to remove mold from your potting soil as soon as possible. Let’s get it done today so that you may enjoy your garden! 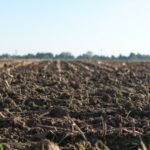