One of the most prevalent reasons soil may begin to smell is anaerobic activity. This can be caused by several circumstances, such as heavy improper aeration or overwatering.

Potting soil can smell foul because of inadequate drainage and lack of oxygen which leads to the anaerobic breakdown of organic material.

This can lead to bad-smelling gasses such as ammonia and hydrogen sulfide. Soil should have an earthy aroma, and any differences from this should be investigated.

Garden and potting soil can contain an assortment of soil mixes that can all work together in supplying the plant with appropriate notation, drainage and aeration.

Why Does My Potting Soil Smell?

This may be the result of:

The scent of ammonia, sulfur, or rotten eggs indicates that something is decaying in the soil.

Here is an article I wrote on why does potting soil turn green?

What are the Effects on the Soil?

Plants can be harmed or killed by soil-borne pathogens in potting soil, but this does not mean that the potting medium itself is toxic.

Toxic levels of some nutrients, pH imbalance, and salt buildup can result from the overuse of fertilizers.

However, this isn’t an option for contaminated pots of potting soil; the dirt must be remedied and transferred to another container.

Is it OK to use potting soil that smells?

It’s not ideal for making use of this smelling potting soil. However, once you’ve fixed the soil, you can use it to plant anything.

How Do You Fix Smelly Potting Soil?

Soil additives like perlite and vermiculite can be added to the mix to improve the soil’s aeration and drainage.

Amendments to the soil increase the amount of space between soil particles while also providing a channel for water to flow easily through the system.

Most of the organic material and microorganisms, and bacterial activity is found in the first 2 to 4 inches of the soil.

As a result, topsoil tends to be a dark brown tint. A shortage of oxygen in the soil’s top layer may be contributing to the foul odor.

The only way to get rid of bad smells in the soil is to dig it up and remove the topsoil. Keeping your garden odor-free is as simple as following these simple steps.

In adsorption, the carbon’s structure has millions of tiny pores that draw in and eliminate harmful gasses from the air.

Although this is an efficient way to get rid of unwanted odors, it won’t stop them. The smell will reappear after the activated carbon is saturated.

Gently remove the topsoil’s first few inches with a shovel or rake. Place rocks you’ve dug up with your trowel in a separate container to prevent them from being lost.

The stones have taken up a lot of space, so you’ll need to add more dirt. Boulders should be removed from the ground to reduce soil compaction and improve drainage.

The smell of rotting roots can be rather pungent in the soil. It’s critical to get rid of any old roots.

You can use a root picker or a tiny shovel to do this, which you can purchase from a gardening store. Remove all of the soil’s dead roots.

How Do You Know if Potting Soil is Bad?

For the most part, potting soil is fine unless one or more of the following conditions is met:

Absolutely. Potting soils are all made up of organic materials that eventually decompose, leading to a more abrasive texture and density.

Can Old Potting Soil Be Reused?

If you use old potting soil, your plants’ growth may be affected. Even if you’ve stored the soil correctly, you may notice changes in the following aspects of it:

Potting soil will lose nutrients over time if kept in an airtight container.

The potting soil is still usable; it’s only that it will influence the plants differently than brand fresh potting soil does.

By mixing some nutrients into your old potting soil, you can make this problem disappear. We’ll go into more detail about this in a second.

Opened bags of potting soil last around six months before they degrade, whereas unopened bags can survive one or two years if you have them stored on your shelf.

A best-before date may be printed on the inside of your bag.

The anaerobic degradation of organic substances in the first few inches of soil can produce a foul odor.

In this case, it indicates a healthy microbiome, but it’s not an indication of proper drainage or ventilation.

You can get rid of the scent by mixing in a few soil amendments.

If you’re trying to eliminate soil smells, adding perlite and vermiculite will help aerate the soil while also creating channels for water drainage.

While you’re looking for a better soil mix for your plants, adding activated carbon can help you eliminate the problem. 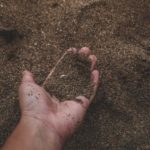