If you keep ducks as pets or rear them for their eggs, you must have wondered why is my duck losing feathers?

People who love to keep birds and adore being a duck parent usually do not get frightened by this act.

However, the new ones are more careful and might want to know why their ducks keep losing feathers?

Don’t despair! We have got answers to all your concerns regarding feather losing.

This process happens almost once a year and is popularly known as Duck Molting.

It is a natural phenomenon of replacing old, worn-out feathers with new, fresh feathers.

Molting is usually observed in ducks and chickens.

However, you might want to confirm if either it’s molting or if it has caught mites in feathers? Let’s find out more.

The Investigation of Losing Feathers

The molting process can be quite hard on ducks.

As a pet parent, you must know every little thing without a doubt.

We are going to cover some very important questions regarding duck molting.

The question also arises if it is the only reason why ducks lose feathers.

Starting with the main query.

Why is my duck losing feathers?

The process takes place once or maximum twice annually.

Molting is worrisome and requires extra care because feathers are vital for birds and ducks.

What causes feather loss in ducks?

Feathers are a durable structure of ducks.

But due to environmental conditions as well as their relative essential role, molting becomes necessary.

The feathers become worn out, or if they do get damaged, cannot heal themselves as they are a “dead” structure, analogous to hair and nails in human beings.

With new plumage, drakes look healthier and new, which brings a positive change in their life.

Secondly, ducks can also lose feathers due to lice and mite infestation.

Although it is more common in chickens, ducks can catch lice and mites which can become fatal in the long run.

How to treat feather loss in ducks?

If the ducks are in a good state of health i.e. they’re routinely active, external bug infestations will easily get under control.

But, if you notice a lethargic, sitting bird scratching and ornery, she might need help.
There are medicated powders available in the markets that help in eliminating lice, mites, and bugs.

For instance, Pyrethrum has proven to be very effective against such infestations.

Then, there are insecticidal sprays that aid in the removal of pests.
However, you have to be extremely cautious while using sprays and sprinkling powders.

The medication is fatal if birds absorb it too much, or gets into eyes or breathing passages.

The treatment should be spaced at 8-10 days.

Ivermectin is another popular agent that is known to control both external and internal blight. The pour-on available at your pet’s shop is applied to the skin.

It would take 2-3 applications to eliminate it. House your infected duck separately until the treatment ends.

How to prevent feather loss in ducks?

Wild birds are home to mites, lice, and all sorts of bugs.

Your pet ducks can only catch this plague if they have frequent contact with such potential vectors.

Minimize this contact which will lessen the risk of picking up the parasites.

A duck that is doubted to have become infected with the plague is to be quarantined.

If he/she remains with the flock, mites will easily transfer from one to another.

What time of the year do ducks molt?

The molting event taking twice annually has been divided into categories- the Nuptial Molt and the Nesting Molt.

This happens at some time of the year when drakes (or male ducks) complete their winter migration.

The process involves losing their drab-colored contour feather which is replaced by brightly-colored new dress-up feathers.

This molting phenomenon is especially for female ducks just like nuptial is for males.

It occurs in between spring to early summer.

They shed plumage to prepare their nests, make it warm and cozy for the new ducklings on the way.

What happens when ducks lose feathers?

Losing plumage is not easy or anyway refreshing.

Ducks get grumpy and irritated during the process that may take a few months to complete.

It is crucial that you must handle this time of the year with care and close attention.

A feather is made up of 85% protein. So it is recommended to provide duck feed that has greater amounts of protein in it. While this process is in continuation, giving non-protein treats is not suitable. However, when ducks get done with molting, bring them back on a low protein diet. Excessive protein in the blood causes damage to their kidneys.

Do ducks grow feathers back?

Molting is defined as the natural phenomenon of losing old feathers to be replaced by new ones.

While drakes get their new, fresh, and beautiful plumage) with blue-green feathers in some species), female ducks get back their feathers at a slow rate.

This is mainly because they’re preparing to lay eggs rather than attracting male ducks.

Do ducks bleed when they molt?

Molting involves falling off of an old feather.

When this happens, a new feather starts growing right away.

The new feather is also known as pin feather or blood feather which emerges from the feather follicle.

Since it’s growing and need constant nourishment, the blood supply in this growing shaft is in abundance.

In case, it gets damaged, there is a lot of bleeding involved.

Until the new feather matures, you have to take care that it doesn’t get plucked out or damaged.

How long does it take for a duck to get its feathers?

It depends on the species and gender of the duck.

Some might take a month whereas some take longer than that, for example, a whole seasonal semester.

The average time for a duck/duckling is 6 to 8 weeks.

Every duck is different and will require different ways to handle the entire process of molting.

It is very important to be aware of the molting process, understanding its progression, and thinking about breeding and migration patterns that depend solely on their genetic nature.

This helps in making informed choices on managing molts. 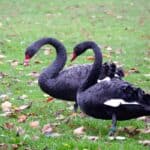 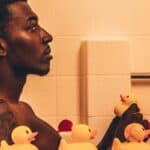